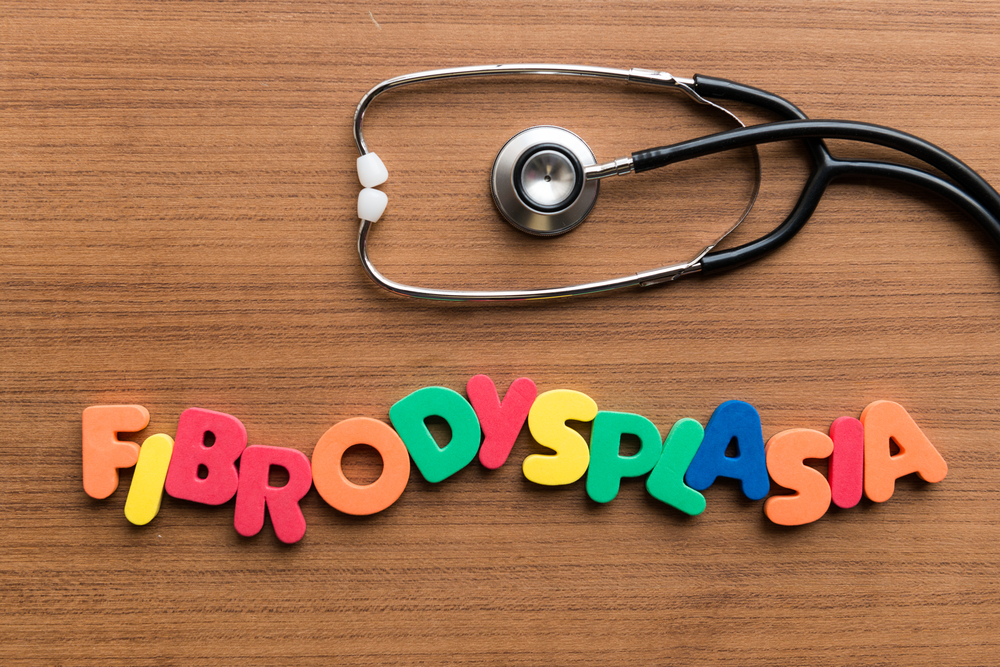 Fibrodysplasia Ossificans Progressive (FOP) (MIM:1351000) is a rare disease that affects connective tissue. Its worldwide prevalence is 1:2,000,000 inhabitants. Although the transmission of Fibrodysplasia Ossificans Progressive is autosomal dominant, in most patients it is due to a new mutation in previously unaffected families. It is characterized by the formation of heterotopic bone in soft tissue, associated with different bone malformations. The most obvious characteristic is a deformation in the first toe of both feet (hallux valgus), which is present in 95% of cases.

Fibrodysplasia Ossificans Progressive generally appears at an early age, with the first pockets of ossification appearing in the first decade of life and being difficult to diagnose in the early stages of the disease. The appearance of ossification foci can vary in different cases, although their distribution usually starts in a craniological way and from proximal to distal. The most frequently affected locations are the head, the neck and the back. This pathology occurs in outbreaks, which may be triggered by commonplace trauma, invasive procedures, infections or appear spontaneously.

The physiopathology of Fibrodysplasia Ossificans Progressive is not fully clarified, although an overexposure of bone forming protein (BMP) has been described, which could act as a signal for the formation of heterotopic bone.

The genetic alteration of Fibrodysplasia Ossificans Progressive is due to mutations in the ACVR1 gene located on chromosome 2q23-24, with most patients presenting the mutation p.Arg206His in heterozygosis. Publications describing new mutations in the ACRV1 gene associated with FOP are currently appearing.

Currently, no treatment has been shown to stop the disease.

A 6-month-old infant, admitted to our hospital for urinary tract infection, with no family or personal history of interest, was diagnosed in one case study. Physical examination showed different skeletal malformations such as bilateral hallux valgus and clinodactyly of the first finger of both hands, which according to the mother were present from birth. Two subcutaneous tumours at cranial level (left parieto-temporal and right parieto-occipital), of stony consistency and of approximately 3-4cm in diameter, stood out (fig. 2). These had appeared a few months after birth, unrelated to any traumatic event. The rest of the exploration was normal. The haemogram, biochemistry and analysis of the phosphocalcic metabolism were normal. X-rays of the feet and hands showed bone malformation of the first toe of both feet and a shortening of the first metacarpal. A cranial CT scan was performed which was normal and showed no foci of heterotopic ossification. In the case of suspected FOP, a genetic study was requested, which showed in heterozygosis the mutation p.Arg206His (c.617G>A) of exon 7 of the ACVR1 gene, which confirmed the diagnosis. The patient completed the treatment for the urinary infection for which he had been admitted and was discharged. At present, he is still undergoing regular check-ups in our unit, having so far not presented any exacerbation of the disease.

The rarity of Fibrodysplasia Ossificans Progressive means that most of the time it goes unnoticed or is misdiagnosed, despite the fact that the typical malformations are present from birth. One study showed that in up to 87% of published cases the initial diagnosis was not correct. This fact takes on special importance when it comes to avoiding invasive procedures that trigger new outbreaks of the disease and/or unnecessary treatments.

Although there is no curative treatment for Fibrodysplasia Ossificans Progressive, different publications suggest that the use of anti-inflammatory drugs can help reduce the intensity of outbreaks. Bisphosphonates are another therapeutic option, but should not be used routinely because of their side effects. We must emphasize both multidisciplinary management to help improve the quality of life and mobility of these patients, as well as preventive measures. New treatment modalities are currently being developed based on the use of monoclonal antibodies that inhibit BMP, which could provide a solution to this disease in the future.